Seven days ago today it was Saturday, April 17th 2021. I don’t remember everything I did that day but I know I spent the majority of my day writing a script in Python to remove duplicate DICOM objects from disk based on their SOP Instance UIDs. I was doing this for my job and I was excited to be doing something other than the mundane duties befalling my job title. My current position is one I had known was ill-suited to my skill set since very early on. But it was little projects like that one that made my job bearable and worth keeping at least for the time being. I had promised my boss that I was not going to leave for 6 months at least. He needed me and it felt good to be needed and it felt even better to be contributing in that way. It was devops projects like that one that made my job suck just a little bit less.

If I hadn’t been writing this Python script would I have been doing any of the above duties? Honestly, No. Why? I’m sure the full answer to that is complicated, but the short answer is because I would have lacked the motivation. Try getting anything done when you have ADHD and zero motivation. People who don’t understand might think that’s a copout, but that’s like saying being a paraplegic is a copout for not walking. I’ll admit that the inability to execute action when motivation is lacking does not explain why that answer is still No. WHY isn’t there motivation? That’s a question deserving it’s own collection of posts. I’m sure I’ll spend just as many more hours psychoanalyzing myself in the future as I have in the past.  But moving on… 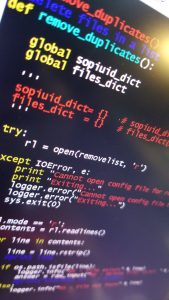 The next day was Sunday.  My script was already doing the work I wrote it for but because I was using the shoot-from-the-hip design methodology, it wasn’t done morphing into what it needed to become. But I was able to step away from the desk a lot more that day.

I walked around the house and noticed Zuzu’s cage area was really kinda gross even by my standards so I moved the cages, rolled up the paper I had laid down, vacuumed it, and then started scrubbing the floor on my knees to remove the bird poop that the paper failed to catch. Once that was done, I cleaned the bars on the new cage. He’s transitioning to a new cage so both are side-by-side. I decided it had been long enough so I swapped the cages too.

I felt energized because of my script. I loved what I had done with that script. I knew it would blow away my coworkers and my boss (as much as a script that removes duplicate DICOM objects could blow anyone away).     But I felt proud of myself. Real proud.

At this point, it was early evening. Life was not without it’s everyday issues, but life was good (for me).

This site uses Akismet to reduce spam. Learn how your comment data is processed.